Play is a Child’s Work

The outdoors used to be a place where children could run, play, build, create, and do the mildly hazardous things children love to do. I remember walking the 5′ high cinderblock wall that ran like a vertebrae down the center of our block, jumping repeatedly from the garage roof  (the lowest side, of course) so I could learn to land lightly, climbing trees to read a good book, using scrap lumber and other discarded material to build a fort in a neglected corner of land next to the freeway across the street from our home, and countless other adventures that would make many adults wince. And I wasn’t even a particularly adventuresome kid.

Things have changed a lot, though. Children rarely seem to have the freedom to roam and play independently, and this is not a good thing. Hanna Rosin’s article, The Overprotected Kid, in the March issue of The Atlantic, is a fascinating look at what has happened to child’s play, and how it is affecting the development of significant skills. One chilling article in the Washington Post observes the decline of play in preschoolers — and the simultaneous rise in sensory issues. Play matters.

Sometimes it takes an outsider to diagnose an ailing culture. Even though “play been demonstrated to improve academic performance, behavior, mental and physical health in children,” filmmaker Erin Davis suggests that America’s obsession with litigation, and “the rejection of any activity that does not have an immediate, quantifiable value” makes it more difficult to provide public adventure playgrounds. I don’t think it would be unfair to say that the disappearance of play boils down to money — the fear of losing it through lawsuits and the fear of want due to not competing hard enough.

It’s not easy to combat such short-sightedness. Charlotte Mason would be appalled. She advocated ample time outdoors, and with good reason. Here’s what she suggests:

In this time of extraordinary pressure, educational and social,
perhaps a mother’s first duty to her children is to secure for them a quiet growing time,
a full six years of passive receptive life, the waking part of it spent for the most part out in the fresh air.
And this, not for the gain in bodily health alone — body and soul, heart and mind, are nourished
with food convenient for them when the children are let alone,
let to live without friction and without stimulus amongst happy influences which incline them to be good.”
(Volume 1, page 43).

My boys wore Two Little Savages to shreds, taking it outside for inspiration and diagrams.

She goes on to emphasize that “They must be let alone, left to themselves a great deal, to take in what they can of the beauty of earth and heavens; for of the evils of modern education few are worse than this — that the perpetual cackle of his elders leaves the poor child not a moment of time, nor an inch of space, wherein to wonder — and grow.” Honestly, there have been times I wanted to frame this quote and give it as a gift. It is not conventional wisdom to value the observation and thinking of a child, but children are persons, and they need space and time in which to simply be.

The emergence of adventure playgrounds

An adventure playground can offer over-sheltered children the opportunity to do real things in an environment that combines nature (trees, mud, etc.) with some of the detritus of life (discarded building materials, furniture, tools, etc.). According to Rosin’s article, adventure parks came into being in post-WWII Britain. They were very different from earlier playgrounds, but consistent with cultural expectations after the war. It seemed reasonable that “Children who might grow up to fight wars were not shielded from danger; they were expected to meet it with assertiveness and even bravado.”

In these playgrounds, children are able to climb, dig, build, pretend, deconstruct, contemplate, and more. And in so doing, they learn. They don’t just develop skills that help them do adult things later, they also learn about justice and mercy, and how to use their hands and bodies to accomplish goals and tasks without getting hurt. They learn to make decisions, and what to do if those decisions don’t work as well as they hoped. It has been said that play is a child’s work, and without doubt, it is where a tremendous amount of learning occurs.

The Land: An Adventure Play Documentary

If you’re too young to remember adventurous real-time play, this trailer for The Land will give you an idea of what free play looked like in the twentieth century and earlier. You’ll see children experiencing the delight of having time, space, and materials to work with, far from the “perpetual cackle of his elders.”

“The Land” Teaser – An Adventure Play Documentary from Erin Davis on Vimeo.

Don’t miss this interview with the filmmaker, Erin Davis: Inside a European Adventure Playground.

You can discover more about a person in an hour of play than in a year of conversation.
Plato

Although a playground, however creatively designed, isn’t the same as raw wild space, it’s better than nothing. Happily, homeschoolers have the ability to create their own adventure playgrounds. Even in suburbia you can provide space, time, ropes for climbing and swinging, ladders and old tools, then allow a random supply of building materials and other junk to accumulate behind a garden shed or somewhere out of view, and you’ll have the ingredients for constructive, interesting play. Children grow up fast, so the clutter won’t be there forever, but there is a season of life in which it’s a source of learning and delight, and it’s well worth it.

Whether you’re in the city or the country, there is ample opportunity for adventure. Parents just have to be brave enough to allow it!

If you can’t create an outdoor play space with real stuff, there are adventure playgrounds in a number of U. S. cities. New York City’s Central Park has one, and several cities in California do as well. 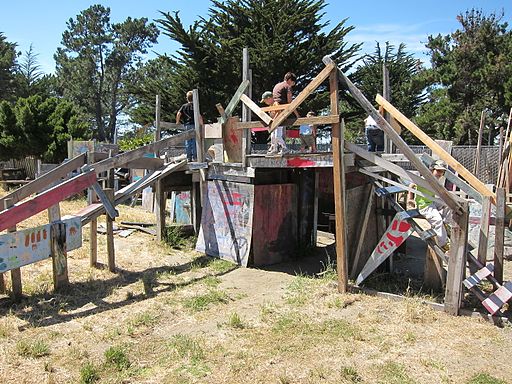 Let the Children Play, It’s Good for Them! In Smithsonian magazine, a researcher in cognitive development argues that “when children pretend, they’re not just being silly — they’re doing science.”

In Let the Kids Learn Through Play, the New York Times evaluates the question of play vs. early academics in light of scientific research.

Where the Wild Things Play: An excellent audio report and article from NPR on the role of play in child development.

The Need for Pretend Play in Child Development in Scientific American.

Why Children Need Play on Scholastic.com reports on the many benefits of play and the dangers of eliminating it in favor of more academic pursuits.

The Last Child in the Woods: Saving Our Children from Nature-Deficit Disorder by Richard Louv. It’s packed with evidence that outdoor play is a child’s work, and a very necessary work at that, for nature-deficit disorder can trigger a host of other unpleasant disorders.

The National Association for the Education of Young Children (NAEYC) has gathered a variety of articles and resources on children’s play.

National Institute for Play has articles and statistics on play.

The American Journal of Play, Vol. 1 No. 3,  has published a study on Children’s Pastimes and Play in Sixteen Nations: Is Free-Play Declining? (PDF)

Take Your Child Outside: Here’s Why.

Never neglect an opportunity to play leap-frog;
it is the best of all games, and,
unlike the terribly serious and conscientious pastimes of modern youth,
will never become professionalized.
-Herbert Beerbohm Tree

This site uses Akismet to reduce spam. Learn how your comment data is processed.

Here’s our annual conference newsletter handout with booklists and articles. We’d rather be sharing it in person, but for now, you can download the 2020 Everyday Educator here.

Recent Posts from : Excellence in Literature by Janice Campbell

Charles Dickens (1812–1870) is one of the best-known authors of Victorian England, and he has created some of the most memorable characters in British Literature. Early Life He was born on the 7th of...

John Milton (1608–1674), author of Paradise Lost and other works, was an English poet. He was born in Bread Street, Cheapside, London, on the 9th of December 1608. Milton’s Parents and Early Life His father,...

In “I Am the Very Model of a Modern Major-General” from The Pirates of Penzance, Gilbert and Sullivan’s character introduces himself by presenting an absurdly detailed résumé in the musical form of a “patter...

The Ballad of Reading Gaol

The Ballad of Reading Gaol (gaol is the British spelling of jail) narrates the story of an execution that occurred while Oscar Wilde was imprisoned in the late 1890s. It does not attempt to...

Robert Burns (1759 – 1796), a Scottish poet and lyricist is not only the best known of the poets who have written in the Scots language, but he has long been considered the national...

Excellence in Literature has been honored!